It is safe to say that most people have been victims of fraud or theft – and in an age when cash is slowly becoming less relevant, hacking or general malicious access to someone’s bank account will become more of a daily occurrence. However, Global Data has found that as encryption and security techniques are increasingly complex, fraud will naturally go to the point of least resistance, i.e. credit card theft, confidence tricks, and stealing banking data over the phone.

Vlad Totia, Payments Analyst at GlobalData, says: “Different generations are affected by fraud in different ways. While Gen Z and Millennials are more tech-savvy, a good portion of those defrauded are done so through social engineering tricks or by simply losing their wallet or purse. On the other hand, the older generations are more prone to being fooled online.

“One constant trend to observe is the fact that both the Older Generation and Gen Z are much more prone to being the victims of confidence tricks than other generations. Regardless of how knowledgeable they might or might not be, people who are either very young or very old still seem to be more trusting than others.

“Older generations are also more vulnerable to being defrauded at merchant locations through skimming techniques, i.e. where a merchant charges more than the actual price of a product.”

The radar chart shows various consumer groups susceptibility to different kinds of online banking fraud, with Generation Z most susceptible to losing their purse or wallet. 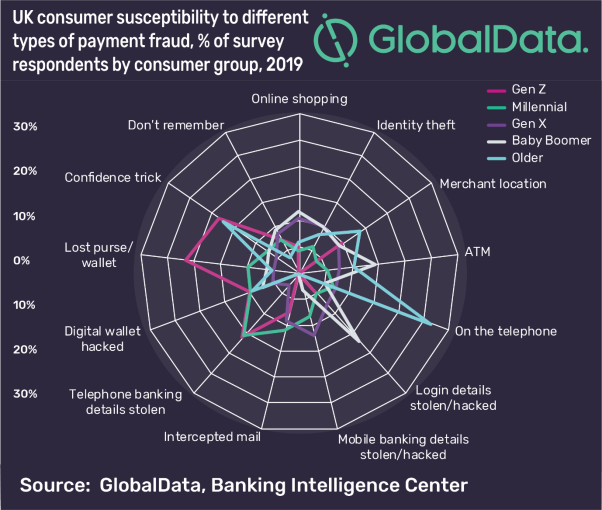 Millennials, on the other hand, are somewhat safe from most defrauding techniques compared to their younger and elder counterparts. Their largest vulnerability seems to be having their telephone banking details stolen, sharing the proportion with Gen Z.

Totia adds: “Defrauding techniques will not simply go away just because of more complex security. People from different generations, backgrounds, and socioeconomic means have their own distinct vulnerabilities and as long as there is still money to be made or stolen from them, fraudsters will always find ways to innovate their methods.”

Share on FacebookShare on TwitterShare on Google+Share on LinkedIn

Everything you need to know about Revolut, the UK’s digital banking unicorn

Tech Chats with EY: GDPR one year on

The UK Gaming Boom: Why It Keeps on Growing

Twenty Years Of Reinvention: How Bingo Went From Bust To Boom

Challenge accepted. How a challenge prize changed our business for the better

Have you cracked a million £ in revenue?