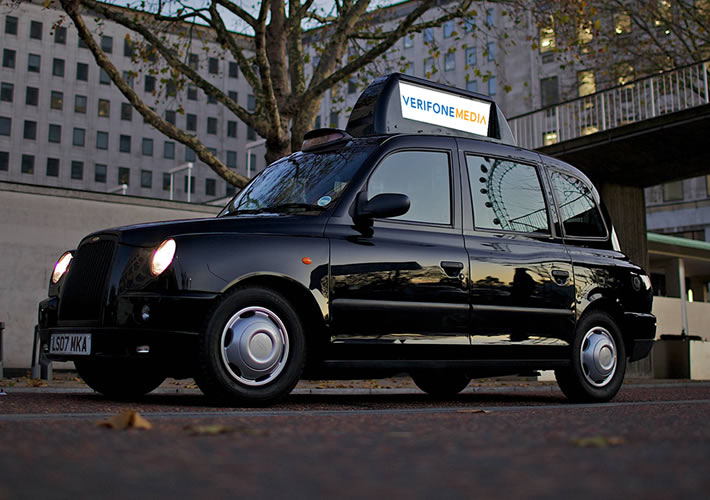 Two London startups, each with their own proprietary technology, are competing against each other to become the default digital rooftop media provider to London’s black cabs. Who will come out on top?

On the left: 28-year-old Richard Corbett, the young founder and CEO of Eyetease, his first startup. On the right: 47-year-old Piers Mummery, CEO of

BrightMove Media, a seasoned entrepreneur with a history of leading fast-growing companies.

Corbett founded Eyetease in 2010, aged just 24, when he spotted a gap in the market. “I was working as a new venture strategy consultant, where I’d learnt to identify gaps in the market and develop new business ideas,” he explains. “I left my job to go practice what I had been preaching, looking for the next big opportunity.”

“Taxi media was really falling behind in the outdoor market,” explains Corbett. “But it’s the perfect format to reach high volumes of people: city centres are always busy and the top of the taxi has good positioning, at eye level, facing the the sidewalk. So I decided to develop a digital proposition for taxi top advertising.”

While it was a good concept, Corbett had little knowledge of just how complex it would be to bring a digital taxi top to the market would be.

“It was a disruptive proposition, but when we started working on the idea, we were faced with massive questions,” he explains. The key to making it work was to develop a product that was (a) technically possible and (b) with a commercial price point.

Corbett’s research revealed that VeriFone Media, the world’s biggest taxi media company, had previously attempted to create a digital taxi-top product, but the technology was still unreliable and the company had to axe the project before it got off the ground.

So Corbett’s game plan was to bring them something reliable. “They agreed to do business with me if I could address their key challenges and build something able to last five years on the top of a vehicle,” he explains. “That was the validation I needed.”

Today Eyetease has an exclusive agreement with Verifone to provide hardware and software to enable taxi-top advertising.

In truth, building the technology was the easy part, says Corbett. Well, perhaps not easy, but easier than the regulatory hurdles the company had to jump over to get the technology approved by Transport for London, which is responsible for London’s black cab industry.

“As the first company to introduce this in London, there just was no approval process in place for this, so we had to create the process ourselves in collaboration with TfL, DfT and VCA,” he explains.

The total cost of testing so far? £250,000, Corbett admits. He still retains ownership of the business, however. “It’s been interesting conversations with friends and family to extend credit lines. But it’s better than a bank loan: when your family relies on this money for retirement, you can’t give up – you have to make it work.”

Finally, after working closely with TfL, the VCA (the UK’s vehicle type approval authority) and the Department for Transport, Eyetease received approval earlier this year to trial and evaluate the product on a fleet of real black cabs.

But, four years on, Eyetease is no longer the only player in the market. Enter BrightMove. Corbett remembers how it happened – he was called out of the blue last year by one of his customers.

“He called me to say that a software company, Equitech IT Solutions, was looking to do the same thing as me. They didn’t yet have a market-ready product, but they were starting to speak to the market, and were trying to develop the same product as me,” Corbett recalls.

In reality, Eyetease’s competitor had already been working on a product since the year before. In 2011, Equitech had approached hardware design firm BVM Limited to develop an intelligent system that would allow them to install dynamic advertising displays on the roofs of taxis.

Today, that technology – TaxiCast – is now part of BrightMove Media, which was formed in December 2012. BrightMove is linked to Equitech through the latter’s founder, Craig Holloway, who is now BrightMove’s chief operating officer.

“I guess there is always going to be competition in a market where there is money to be made,” says Corbett. “But it’s frustrating when you’ve been working on a product for years, bootstrapping, and another company swoops in, backed by $1m of investment and with a team of 5-6 chaps in their late 40s who can throw cash at it.”

He adds that, in any market, the second-mover also has the advantage of the approval process already having been created by the first mover.

For Piers Mummery, CEO of BrightMove, there is nothing wrong with healthy competition.  He adds that the company built its own prototype two and a half years ago, developing and testing it with TfL: “We spent two-three years working very diligently with the regulators and automotive trade to get through the barriers.”

Today, both companies have been approved by TfL to be tested on the road. The key difference between them, however, is their technology: BrightMove has adopted the LED (light-emitting diode) format, whereas Corbett’s company has opted for LCD (liquid-crystal display) technology.

Unsurprisingly, both argue their technology is better-suited for being on top of the iconic black cab. “LED is, simply, the preferred medium for broadcast advertising,” says Mummery. “Even in bright sunshine, LED works fine.”

BrightMove’s technology certainly does have the “wow” factor: just this week, the company has rolled out a campaign with Magnum, which is linked to ambient conditions. The taxis detect when temperatures rise above 19 degrees Celsius, and then automatically activate the screens to advertise Magnum’s new Kisses ice cream range.

Mummery does admit, however, that the resolution with an LED screen is less sharp than LCD. That does not matter for displays on top of taxis, though: “The vehicle is moving and you don’t want it to be too distracting – you can see the media from 20-30 metres away without a problem. It just works.”

Corbett agrees that LEDs are fine outdoors (in fact, Eyetease has its own range of LED taxi-top displays which it sells abroad), but says that the LCD product is superior. “LEDs are cheaper and popular for large billboards on the side of the road, but when it’s on a smaller scale – like on the top of a taxi – the resolution is so much lower because there are fewer pixels. We’d never want to go down that route in the UK.”

It is only the beginning of taxi-top advertising in London – indeed, neither company has received full approval yet, both are still just in the live testing phase. But one thing is certain: both are keen to get the upper hand over the other and win a slice of the lucrative out-of-home market.

Corbett is adamant that LCD will win the battle: “Our competitors do have a value in the market, and it’s good that they’re pushing this new type of outdoor display. But at the end of the day, Eyetease is working with the biggest player in the market place, and I’m confident we’ll far exceed their network and become the preferred format.

“This shouldn’t be about who is first or second, but who delivers the best format. I’m not in it for a short-term gain, I want to deliver value to the brands that advertise with us – it is them who will decide where they want to spend their money.”

And spend money, they will. Mummery says that taxi drivers are paid £6,000, split over a period of three years, to host one of BrightMove’s taxi-top displays. The appeal of the taxi-top display is not just its novelty (ie the Magnum campaign, above), but also thanks to its perfect eye-height location on the road.

The market is big enough for both, says Mummery. “It would be arrogant to say that there is only space for one company,” he explains. “This certainly isn’t a straightforward market, but there is plenty of room for growth in the sector.

Time will tell who comes out on top…