The world’s wealthiest entrepreneurs are now allocating more of their own money into funding the next generation of tech startups, creating a virtuous circle of putting smart money to work, according to research from Dealroom.co for Talis Capital.

Using data from CapGemini, Forbes, Bloomberg, UBS, Wealth-X, and KKR, the report reveals that tech wealth is growing twice as fast as other private wealth sources and in this long-standing low-yield environment, private wealth investment is shifting into European VC funds.

These flows into VC have tripled over the past five years, with longer term equity assets such as venture capital now seen as more attractive investments than buying property.

More entrepreneurial wealth than ever is being created by tech founders – particularly in Europe – and there is a huge appetite to invest in early stage deals which has led to the emergence of a new type of investment firm; a hybrid VC.

Backed by entrepreneurs, and capable of sourcing and leading high-growth investment opportunities, these hybrid VC funds can be flexible to the ever-changing market.

A complementary survey, carried out by Talis with a selection of ultra-high net-worth individuals and family offices to support these findings, similarly reveals that there has been a dramatic shift in the attitude towards venture capital.

Almost half (47%) of all respondents a decade ago did not invest at all in VC and now 92% are committing their capital to VC. Amongst these investors there was a 5x increase in the number of respondents investing more than 20% of their capital in VC compared to ten years ago.

The rise of private wealth 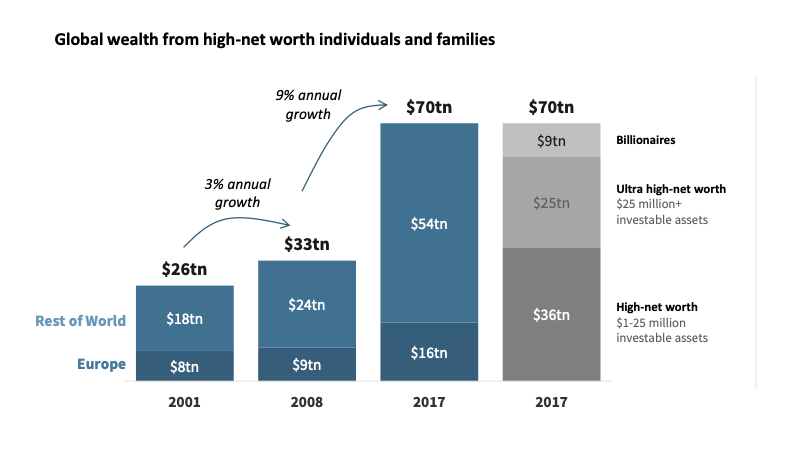 This is largely made up of private wealth from the likes of established entrepreneurs such as Amazon boss Jeff Bezos, Google’s founding partners Larry Page and Sergey Brin, and Spotify’s Daniel Ek and Martin Lorentzon. However, the more recent exits of European fintech firm Adyen and iZettle have created new tech millionaires, adding a new generation of the uber wealthy to the mix.

Since 2013, tech exits in Europe have totalled $354bn with $115.5bn worth of exits last year alone. As a result, more wealth than ever before is being created by tech founders across the continent, led by the likes of Spotify’s recent $30bn exit. 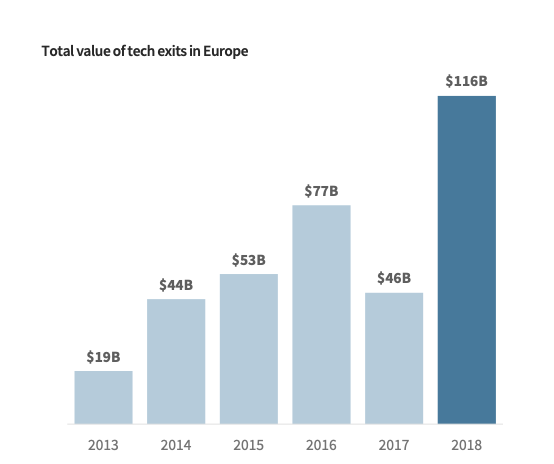 At the same time the average age of investors, who have significant capital to invest, has fallen. Since 2011, a Bloomberg survey found that the average age of US investors with $25m or more dropped by 11 years to 47. Research from BNP Paribas found millennials are more than twice as likely to invest in VC funds and startups than other age groups.

Over the past five years, the number of individuals and families using private wealth to directly participate in VC rounds in Europe, for instance, has grown five-fold to a record-breaking $5bn – and 2019 is on track to beat this.

Matus Maar, co-founder and managing partner at Talis Capital, said: “We are seeing many more investors wanting to invest in tech and data driven businesses at an earlier stage. In part, this is to do with a new generation of ultra wealthy individuals and families who made their money through tech and want to keep investing in the sector.”

“Originally we were born out of a single family office and over the past ten years we’ve been on a journey which has led us to evolve into a fully fledged VC,” added Vasile Foca, co-founder and managing partner at Talis Capital.

“Having a private-only investor base has been very strategic for us and the way in which we’re structured and how we operate has really come out of the ways in which our investors like to work – we now invest on behalf of a group of over 30 LPs.”

“We predict venture capital and early stage tech investing will only become more popular with the world’s wealthiest, especially as the younger generation are persuading their previous generations that this is where they should be investing,” continued Maar.

“They want to create strong legacy investments and work with exciting smart startups that can improve our world for the better in areas like health technology, sustainable farming and food production, mobility and climate change.”

Mark Richardson, philanthropist and investor, also commented: “Investing via funds complements our own skills, knowledge and expertise in investing and we believe supporting the next-generation of entrepreneurs is a real responsibility.

Our attention is drawn to investing in start-ups that disrupt traditional ways of doing things as well as those associated with sustainability and climate change. We take great pride in having the access and opportunity to invest in this new wave of founders and believe our allocation in this area will continue to increase”

Smart, 3D and eco-friendly: The future of printing