Unlike most fundraising platforms which usually charge a commission on donations, Believe.in gives 100 per cent of money raised through the platform, including GiftAid, directly to the intended cause.

Believe.in is a Tech City-based, venture-backed platform for charities and individuals to interact and raise funds. Co-founded by Matthias Metternich and Will Cookson, the highly-designed, user-centric site aims to change how charities and donors interact and fundraise online.

Believe.in is working with the PayPal Giving Fund, which ensures that credit card fees will not apply to donations. More than 170,000 registered UK charities area already profiled on the network, with plans to expand further across Europe and the US later this year.

“We estimate that every year charities lose approximately £750m to middlemen, who take a cut from the donations they help process. Believe in provides a solution to this that does not tax people’s generosity and enables people to give and fundraise for the charities they care about without a penny lost along the way.

“At Believe.in, our first focus has been to evolve how charity giving operates online but we’re also already working on a series of other disruptions to major issues affecting the sector.”

The company is able to ensure that 100 per cent of donations go entirely to the intended causes by generating revenue from a different source. Unlike other fundraising platforms, Believe.In will not rely on taking a cut of donations or of GiftAid – instead, it will offer enterprise technology to charities to help them adapt to the online world. Metternich explains:

“Over the next decade, a huge transition will take place in the charity space which will require them to make a huge investment in the digital space. They need to get better at online and learn how to engage with people online – we’ve created those tools for them, and will offer them to the charities at tiered pricing levels. It’s a freemium model.” 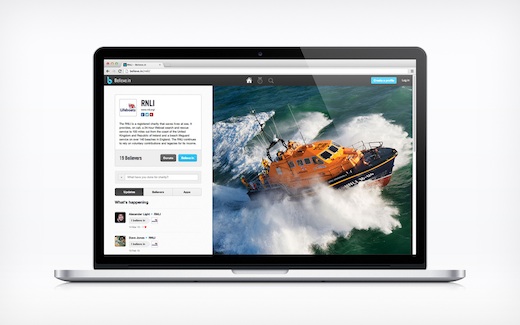 For individuals, Believe.in makes it possible to connect with and follow charities and causes they support, as well as share, track and celebrate details of fundraising activity, and of course, donate.

For charities and not-for-profit organisations, the platform enables direct connections with supporters, allowing them to grow communities, engage with followers and accept donations. Believe.in activity can also be shared across other social networks, such as Facebook and Twitter, to gain further support and awareness.

“We’re always looking at how we can do things differently to achieve the best possible experience for our loyal supporters,” says Ikram Dahman, fundraising director at Leukaemia & Lymphoma Research. “Believe.in delivers an exciting new alternative to online fundraising. With 100 per cent of the money raised by fundraisers coming directly to the charity, that could have a huge impact on the sector.”

The company also today announced the closure of its successful funding round, led by Index Ventures and Greylock Partners plus a consortium of high profile European angel investors, including Jonty Hurwitz, Playfair Capital’s Federico Pirzio-Biroli and Mark Sainsbury.

Pirzio-Biroli says his motivation for investing in the company is because Believe.in can disrupt the charity market: “Just Giving has a large share of the charitable fundraising market, but has not innovated in a while. It offers a closed vertical platform with little-to-no capability for multiplying donations virally – in other words, there is no knock-on effect. You support your friend, but rarely do you remember who your friend is supporting.

“With the easily-implementable tools available today to spread the word, the time is right for a fundraising platform that uses as many of these tools as possible. Believe.in offers this evolution, and does so through a visually-appealing and emotionally-engaging way.”