There might be an EdTech deficit in the UK, but that doesn’t stop every up-and-coming creative from aiming high.

We spoke to some of London’s brightest young tech entrepreneurs – here, we talk to Andrew Brackin in full. 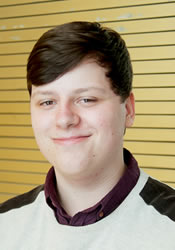 Andrew Brackin, 18, Founder of Bunchy and winner of the Thiel Fellowship

I’m a startup founder, run the Tomorrow’s Web event every quarter and I’ve been involved with London startups and events since the pre-Tech Hub days.

What types of jobs are your friends doing?

Why did you choose to take the avenue you’ve chosen?

Because I’d already co-founded a marketplace that grew to 100k users and wanted to continue working on startups.

How does attending networking events e.g. the Drinkabout, help you?

Mostly just because you get some of the social aspects you miss from an office job. I don’t spend all day working with lots of people so it’s fun to talk startups, have a drink and meet some new people. Hacker News also has a great audience.

As a young person in London’s Tech City, do you think youth are being supported enough in their ventures by the government, the TCIO, and other tech initiatives?

I don’t know what initiatives there are especially. I’m not really getting any support but I don’t want any either. The startup loans are interesting and seem useful for some and they’re definitely going in the right direction. I get the same amount of support from the TCIO as any other founder (which is a great amount).

What more could be done to support young tech entrepreneurs?

What do you think are the disadvantages of being under 25 in Tech City?

Not a lot, I don’t think much changes when you hit 26. Some later stage investors may require more experience than young founders have but this isn’t often the case.

What do you think about the statement that “it’s a young man’s game?” re: tech entrepreneurship?

I think there’s too much focus on starting companies and too little on what you’re actually creating. There’s no age limit on building a really valuable product.

For you, what are presently the most exciting parts about Tech City?

The community, seeing people come from around the world to Silicon Drinkabout or seeing startups popping up on OId Street in former run down shops or buildings.

What are the most exciting tech developments across the world for you?

Google Glass, 4G and Firefox OS are all interesting and bringing a new type of app.

Who is the most inspirational person in London’s tech scene?

And the global tech scene?

Dennis Crowley and Jack Dorsey. Both are great entrepreneurs.

What’s your advice for young people getting into London’s tech ecosystem?

Go to events, get internships or roles and get involved. Start with the roundabout kids meetup as you’ll meet lots of great young folks but get involved as that’s the only way you’ll get into the ecosystem.

And now, what are you going to do in Silicon Valley?

I’m going to be working on my startup and engage in meetings, events and goings on with the fellowship to accelerate my progress and build a network in Silicon Valley.