Digital transformation is a buzzword we’ve heard over the last few years, but with ever smarter and more powerful mobile devices, cloud apps, video conferencing, extended reality collaboration across screens, headsets and so much more, what’s coming this decade will make Slack and Zoom look like they’re from the B&W TV era of modern technology.

Everything moves in cycles, and we’ve certainly already experienced a range of cycles in computing. From the centralised word processing systems of the 1970s through to the decentralised freedom of the 80s and 90s Mac and PC or personal computing revolution, nothing ever stays still.

The mid to late 90s saw the birth of the modern Internet era, and the first great portable devices like the Palm Pilot and the first digital cell phones taking over from earlier analogue models arrive as well.

The 2000s saw the move towards actual broadband over the dial-up 56k and slower 90s, with ever more advanced web sites and online services from the 2000s through to today, in our dramatically COVID-19 affected world of 2020.

Today, we enjoy the  widespread availability of VDSL and faster speeds, above and beyond the ADSL speeds of the last decade, with cable, fibre, satellite and both 4G and 5G mobile broadband data all now widely available in most countries around the world. They’re available at the most competitive pricing yet, and because of this, we’ve been able to stay connected as never before during this ongoing pandemic, thanks to Zoom, Slack and other collaboration and communications platforms. However, those services were never relied on as they are today. In the last decade, those tools were in the minority, as people preferred to connect in person at local and international meetings, conferences and events.

The rise of challenger lenders: London-based Koto seals £1.3M for UK debut, over 12M users can now get credit easily

Today, months into the lockdowns, mask wearing and spiking virus infections, , the reality of working online, endless Zoom meetings, staying connected well beyond normal working hours through apps like Slack, the missed office environments and even the missed commute, and we see both the limitations and the advantages that online life, taken to extremes, delivers.

Sure, we will all think twice about the real necessity of travelling halfway or even across the world for a meeting or conference, even if a vaccine miraculously ends up protecting us all from COVID-19 and its presumed mutations. Despite the frustrations we’ve all endured from being connected in so many ways, the tools we’re using were developed last decade, and it shows.

We need next-generation tools, apps and online services to bring us into the Internet 4.0 era of seamless ultra-high speed broadband connectivity, with virtual, augmented, mixed and extended reality collaboration and communication experiences, across smartphones, tablets, notebooks, desktops, and headsets such as Microsoft’s Hololens 2.0, Oculus Rift,

Certainly, humans were not designed to stay in front of their computers for hours a day in Zoom meetings or video meetings using a number of other platforms, from Teams, to Cisco WebEx, to Skype, Facetime, Google Meet, Hangouts, Facebook Messenger, WhatsApp Messenger and whatever else.

There are many ways for people to stay connected, more than ever before, but as these were developed in the 2010s, there’s a revolution coming in next generation collaboration, communication tools and even apps in general to meet the new realities of 2020 life.

With augmented reality glasses due from Apple in 2022 or 23, and ongoing competition from Oculus Rift, HTC, Microsoft Hololens and Windows 10 Mixed Reality, the visual Internet and computing interfaces we read about in Neuromancer, saw in Johnny Mnemonic and elsewhere are finally becoming real – and properly modernized having been developed with modern technologies, as opposed to the very fertile, visionary and impressive imaginations of brilliant science fiction writers.

An incredible example of this reality coming to life, and a very impressive window into a post Zoom and Slack world is Spatial.io. But in the age of the virus, the upcoming generation of products for distributed teams will teach us how to get the most out of the remote work experience, and not just imitate offline processes in an online way, which sadly leads to an accumulation of digital fatigue.

The forced transition to online has accelerated the development of the SaaS industry. VC Firm Digital Horizon, where I work, has been closely following SaaS trends over the last few years.  While online working has boomed by sheer necessity for many who have not been “essential workers” forced to work on the front lines, self-isolation and the online life  led some to a feeling of total digital fatigue.

After all, with endless video conferences, the need to be in touch 24/7, and the potential of dozens of unread messages, the destruction of the boundaries between working and personal time have formed an even more unwelcome intrusion into modern life.

Now, while Zoom, Slack and other leaders report millions of new users, the sad reality is that  many of these users report feeling more like hostages of digital products, and would gladly give  them up at the earliest opportunity.

However, whether we like it or not, working remotely is our new reality, and even if a vaccine against coronavirus is successfully developed, we’ll be forced to telework ever more. Why? Because businesses have now learned to value the effectiveness of remote work more than ever, so much so that they’ll happily abandon today’s SaaS stars in favor of new generation products that can make the remote working experience ever better.

What’s so special about the digital experience

Zoom was not created for the purpose of making us sit at our home office desk every day  for many hours at a time. During the quarantine period, everything moved to a video conferencing format for work, study, sports and even entertainment, but this has let some down the path of “Zoom fatigue.

Among other things, the popularity and success of Zoom is due to the fact that it does not require us to change our habits. The tool presents an offline meeting format in an online way. This is the power of a video service: it is very easy to start using it right away. However, Zoom has weaknesses, among which is the fact it doesn’t actually change our work practices.

It turns out that for truly productive “remote work”, it is not enough to just reproduce traditional processes in digital channels. Creating a digital experience requires other skills – and like all good things, takes real effort to achieve.

For example, the skill of public speaking has been replaced by the skill of recording speeches on camera, but no-one wants to see people just reading from a teleprompter, as there is undeniably a skill in being a great presenter. Reading the audience is also more difficult when done virtually, especially when in a webinar format rather than being with 5 to 15 people max whose faces you can still see.

If you can see others in the meeting, you can try reading emotional states, but if you’ve only a chat room to gauge live reaction with, you have to be able to decode emoji on the fly, while documenting everything you’re presenting and being organized through great task trackers.

GitLab, which has been operating from the very beginning as a remote company, believes that imitating familiar actions in a digital environment is the first step in the transition of teams to distributed interaction. The next step is the introduction of new point practices in business processes, the introduction of asynchronous communication, and, finally, the deliberate choice of remote-first metrics and working methods.

It seems that we all will face a personal digital transformation, but how will SaaS both help and hinder this reality?

If two months ago, the main metric for assessing SaaS solutions was user growth, it’s now interesting to look at the churn rate. Leaders will have to develop emotional intelligence and know how to work even with B2B products as consumer tools, so they can learn to understand why users leave, how they feel and what can be done to fix the situation.

Sometimes the best solution for tired or exhausted users is, on the contrary, to make the product a little “worse”, that is, to limit the properties that initially made the product so successful. For example, YouTube recently began to remind users that it was time to go to bed. Another example is Slack, which knows how to get anyone to work around the clock. It has developed its own special “Do not disturb” mode.

Meanwhile, lists of hundreds of excellent COVID-19 related SaaS special deals about, witn dozens listed by Engagebay, more than 150 from Adzoona and nearly 200 from Entrepreneur magazine. While there’s some duplication in the lists, these are the most popular and cutting edge SaaS services today, with SaaS exploding in popularity, and not the other way around.

What will differentiate the new generation of remote-native products

The further we move along the stages of transition to distributed work, the more often we will use products originally created for remote interaction. These products might seem uncomfortable and annoying when first used, but this is because they form a new work culture.

Most likely, SaaS for a distributed world will reflect the practices that distributed companies, programmers and Amazon have come to use, including:

– reuse of everything – the principle by which GitHub and Figma were created, now applies not only to code or design elements, but also to any elements of intellectual work. An example: ready-made semantic templates for any document from Almanac.io;

– asynchrony of communications. GitLab has assigned asynchrony to its corporate values, advocates for a minimum number of video conferences and seeks the mandatory fixation of the discussion results so that those absent can familiarize themselves with them. An example among remote-first products is Loom’s asynchronous video communications application;

– documentation of information (instead of non-systematic chats and correspondence). Amazon requires rigorous documentation of any project involving more than two people. The Notion service also requests documenting everything according to the wiki principle.

Remote-first solutions are designed so as not to overload users, help users deeply concentrate when necessary, reduce stress levels and increase communication efficiency. On the other hand, these products still have many barriers to overcome. For example, their onboarding is more complicated: users need to make an effort at the start to evaluate the effectiveness of the tool.

We have all been through the biggest global test of a variety of digital products. It’s interesting to wonder and see which approach will finally make us truly productive in the distance: 24/7 availability, a “programmer” attitude with its introverted asynchrony and documentation, or something else that will become the basis for the third generation SaaS. If we knew exactly what that basis was, we’d be creating that revolution, but while it’s hard for us to imagine what those advancements will be, someone, somewhere is working on them right now, not wanting to cut Slack any slack as they find a way to zoom past the competition and take remote working to the next level of efficiency, convenience, communication – and even fun.

Victoria Dmitrenko serves as the Head of Strategic Design at the international investment firm Digital Horizon.

Victoria has over a decade of experience in marketing communications, strategic planning and product design. She worked with global brands in the field of finance and insurance, FMCG, real estate. Extensive experience in marketing communications in system integrators. Since 2017, she has been the head of strategic design department at the investment company Digital Horizon. 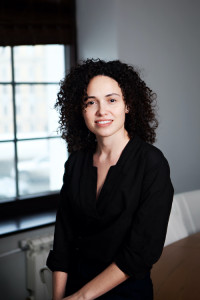